5.) Distinguishing a variety of perspectives among historical actors participating in a given event.

The Paris Peace Conference of 1919, was a meeting set amongst nations of the world, in order to discuss the terms of peace and punishment for the Central Powers, which included Germany, Austria-Hungary, Bulgaria, and the Ottoman Empire. It was at this conference, that the Treaty of Versailles was formed and signed. The Treaty of Versailles were coined by the Great Powers, France, Britain, and the U.S.

Entering the conference, the consensus was that each nation strive for a peaceful and fair solution, in order to maintain a balance of peace in Europe, and in the world. In this blog, I will be looking at the Great Powers (Britain, France, U.S) and what they truly wanted out of the Paris Peace Conference.

Given that France was the most affected, due to the fact that a lot of the conflict happened on French soil, Clemenceau, French Prime Minister, believed that there could be no place for mercy in this conversation. France wanted to make sure Germany would pay the appropriate damages due. However, it can be argued that France were not particularly worried about the reparations, but rather worried about German resilience. It could be that France wanted to drain Germany so drastically, that Germany would never be able to make an attempt to get revenge against France, and so the terms of The Treaty of Versailles were to insure that Germany would not rise up again. https://www.historylearningsite.co.uk/modern-world-history-1918-to-1980/the-treaty-of-versailles/georges-clemenceau/

Britain headed into the conference with lighter punishment than France. Britain did believe that Germany and the other Central Powers had to be blamed for the war and damage, but they did not want Germany to be drained so badly that they no longer had any power in the international stage. Lloyd George, British Prime Minister, wanted Germany to be able to stand for itself in case of any opposing threat that could appear in future. One of these threats that George could have been referring to was the Bolshevik rise in Russia. At the time, Russia had been under rule of the Bolsheviks, and turned into a communist state. Perhaps Lloyd George saw this rise, and wanted Germany to be able to join the fight against Russia in the event that a war would break out again. https://www.historylearningsite.co.uk/modern-world-history-1918-to-1980/the-treaty-of-versailles/david-lloyd-george/

Lastly, the U.S came into the conference with very idealistic hopes. Wilson, who was President of the US, had hoped for a universal peace that would last for a long period of time. Wilson wanted to see peace in Europe, but also recognised that Germany had committed atrocities that had to be accounted for. However, Wilson did not want to vilify Germany, but rather wanted to assist them into becoming a state of peace. It was easy for Wilson to believe in this, because the war had not affected the US as much as the other states, and although Wilson wanted to see a unified world, he realised there was only so much he could accomplish. https://www.historylearningsite.co.uk/modern-world-history-1918-to-1980/the-treaty-of-versailles/woodrow-wilson/

In an attempt to forgo all secrets and hidden agendas, the Paris Peace Conference proved to be the exact that they wanted to fight against, and although agreements were made, it is clear to see that not everything is as it seems. 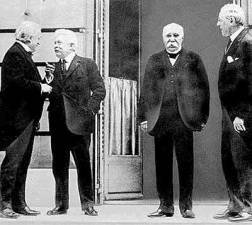 3. Identifies examples of a vast difference between worldviews (beliefs, views, motivations) prevalent today and those more common in the past.

The ultimatum produced by Austria Hungary on 23rd of July, 1914, was a direct result of the assassination of the Archduke Franz Ferdinand and his wife, Sophie, the duchess of Honenburg. Both were heir to the Austrian-Hungarian throne, and their assassinations is what many believe to be the cause of this ultimatum. While much of this is remains true, in present day society, the reasons and motivations could be very different to what was that in those days.

The major difference between present-day society and pre-world war society, is the presence of monarchies and hierarchies. In today’s western beliefs, having a rank-based system would seem uncommon, which would therefore lower the chances of an international conflict based off one life. However, in western society today, many of the conflicts stem from personal agendas or political issues. In a case such as this one, the ultimatum given by Austria-Hungary would be purely based off political gain.

Although pre-world war conflicts had similarities to present-day conflicts, there are still differences in motives, and an example of this would be land and/or imperialism. In this case, this ultimatum was given to Serbia with the intent that Serbia would refuse, thus allowing Austria-Hungary and its ally, Germany, to declare war on Serbia and defeat them in order to gain the land they had, and access to many other countries that could give them benefits.

The differences are prevalent all the time. It is apparent that a modern-day ultimatum like this would be issued in hopes of submission by the opposing side, which would make it easier to politically dominate over said country. With that being said, pre-world war society, like Austria-Hungary, issued ultimatums in hopes for disagreement, so that they could justifiably attack the opposing side in order to gain control of their benefits. 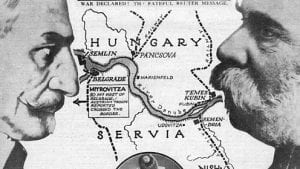 The Second Moroccan Crises of 1911 is considered to be the result of European conflict, which was the case for most international conflicts before 1914, the start of World War 1. Reasoning for this claim could be that France wanted to expand their imperialistic power into Northern Africa. This would also give reason as to why Germany objected to the placement of French troops in Fez, Morocco.

Firstly, taking a look at the crisis in French perspective, it is easy to justify why France sent troops to occupy Morocco. According to History.com, French authorities were made aware of potential rebel groups forming near the countries capital, Fez, and with a request made by the Sultans, decided to send in French troops to occupy the city incase of an attack that could weaken the Moroccan state. Although France may have had their own deeper motives, their actions seem justifiable because of the forthcoming situation, which they had to handle. This is the part Germany did not believe and therefore disagreed with. https://www.history.com/this-day-in-history/second-moroccan-crisis

In a German perspective, it is also easy to see why they had an issue with France occupying Moroccan land. Germany were aware of the French conquest of colonising African land, and by sending troops into Fez, it solidified German view on what France really wanted in Africa. Germany knew that if both France and Britain gained significant imperialistic power, they could become a massive problem if a European war were to breakout, which was inevitable. Germany wanted to limit French imperialism by challenging them in Fez, which proved to be useless.

Secondary European actors in this event had almost all the same reasoning. Britain had an agreement with France that ‘forced’ them to back and support France in cases like these. Although, it could be looked at as Britain did not want Germany to have important influence in Africa, and so that could be why Britain made sure to back France as much as possible, and the same could be said for Russia, even though Russia had not clearly stated its support towards France.

It is important to look at historical events in as many different views as possible, because it opens up the eyes of the historian and therefore, making it easier to tell the full story of an event, even though one could never have the full story.

Welcome to your brand new blog at Edublogs!

To get started, simply visit your blog’s dashboard, edit or delete this post and check out all the other options available to you.

We can walk you through step-by-step in our guide to getting started with your blog.